If you are not proficient in Docker, or that topics like containers and virtual machines are still a bit "fuzzy", have problems working with Docker in development but want to learn and work using containers, this article is for you.

Few weeks ago I wrote an article on Thinking like containers, where I did an introduction on containers and explained the problem that containers solve.

The most popular usage of containers is at production environments, because the team can pack up the application into an image containing the runtime and all the needed dependencies.

Such a process helps to deploy the application in isolation and makes it server-agnostic, meaning that it can technically be easily deployed at any cloud provider in the world.

Containers follow a standard. They will run homogeneously anywhere.

However, some people advocate for containers and use them in development too.

One way to do it, is by downloading the application image used in production and running the container locally. Pretty cool, because it helps to replicate bugs with ease, since the container doesn't care whether it's running in a remote server at AWS or in your local machine. The runtime, dependencies and the application itself: exactly the same as production.

Unless you are trying to replicate some very specific bug, you don't need to download the bloated production image locally. 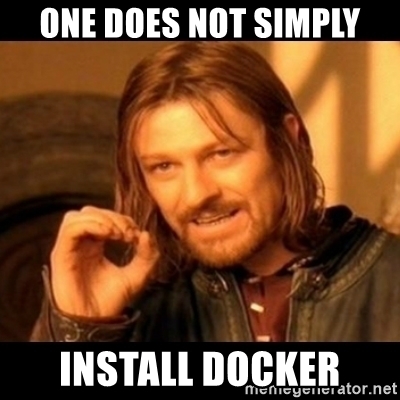 Try to think on the following scenario:

All is ok here.

But after writing some code, you want to see it in action. You run docker-compose up again and that's where you face your worst nightmare: it will install all the dependencies over and over again, at every time you start up the server.

You then realize that Docker and all its container party are a pure waste of time. You give up and install all the application environment in your host machine.

Good luck with that.

How about fixing the Dockerfile?

Yes, chances are that the Dockerfile is not following the best practices, which makes very difficult the container usage in development.

In this article I won't cover the best practices for writing a good Dockerfile, but certainly it will be covered in a future post.

I'll focus on another aspect.

Forget how those real projects are using Docker

It sounds counterintuitive at first but my argument is that, if you start using Docker today, and thinking that containers work exactly like you see in the company's projects, you are doomed.

Containers go beyond that way. I suggest first learning how containers work. Experiment on them. Try out different things and technologies using them.

Then, only then, you can use containers on real projects the right way.

What's the right way then?

Let's supposed you don't have NodeJS installed in your host. People would first install NodeJS, depending on your operating system, configure it and do a couple of things before being able to run:

But using Docker, you don't need to install anything else but Docker in your host computer. By doing so, you could run your command from inside a container:

In terms of performance, it takes almost the same time as running from the host. It's unnoticeable.

It also gives you the ability to have a "version manager" out-of-the-box:

Your host machine will thank you.

In the upcoming sections I'll share some tips that maybe will help you to understand the problem containers solve.

Try to really understand and use containers, not images. Only then, learn how images work. Images are your last resort.

Mastering volumes will save your life. Seriously.

Learn how they work and how then can effectively boost your productivity.

They are not as hard as they seem to be.

Containers are isolated by design. You use them because you don't want to mess up with your host computer.

But in real projects containers need intercommunication. Learn how to take advantage of the Docker network and let your containers talk to each other.

Use docker CLI first. Then docker-compose

The Docker documentation reference is pretty good and will provide you almost every information you need to make your projects running on Docker.

Use the docker CLI heavily. Suffer. Feel the pain on the command-line.

Build a real pet-project full-stack application from the scratch, this is the best way to get comfortable using Docker.

You won't regret and never go back.

In this article I tried to explain technically why I think Docker is misinterpreted by many developers.

Arguments such as "Docker is too much", or "Docker is only useful for production", usually come with lack of understanding. There are very well documented best practices around Docker in development that, if correctly applied, will refute those arguments.

Of course, after all, using Docker in development is not mandatory. It's just a tool, similar to saying you like coding in Vim or VSCode.