Everyone knows that OOP stands for "Object-oriented programming". But what is in fact OOP? Is it a Class? Is it inheritance and polymorphism like we learned across hundreds of tutorials?

Indeed, despite inheritance and polymorphism being important traits that complement OOP languages, none of them define the original concepts of OOP.

In this post, I'll try to demonstrate some elementary OOP concepts while we go together through a bit of history along with a very simple simulation of OOP in, you heard well, Bash script.

According to the wikipedia:

OOP is a programming paradigm based on the concept of "objects", which can contain data and code.

In other words, OOP provides a structure where we can group related data or state, in the form of attributes; and code or behaviour, in the form of functions or methods.

For instance, we could think of an object that represents a Bank Account: 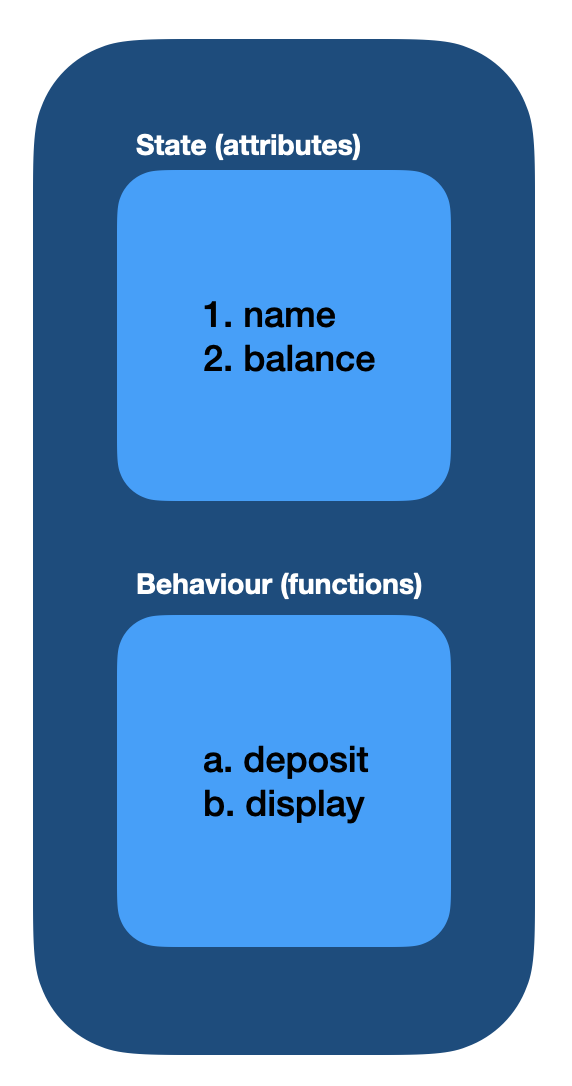 Everything related to a Bank Account could be grouped into this very single structure, an object.

How is OOP implemented?

In the early 60's, a bunch of projects such as Simula emerged with some implementations of "objects". Basically it allowed to hold state and behaviour into a single unit called object.

Despite of many tutorials and courses prefer focusing on inheritance and polymorphism to explain OOP, I'd like to highlight 2 main traits that are exclusively elementary and enough for enabling OOP:

You may be wondering: why in this world one would choose Bash to implement OOP?

I wanted to use a language which is not OOP by design. Also, such a language must not support lexical scope, which is a very important characteristic in order to have the 2nd trait (dynamic dispatch) in place.

Bash is a command shell and script language that is implemented using simple grammar rules hence it does not support lexical scope.

Don't worry, we'll understand what is lexical scope later in this post. Let's start the implementation.

Can we implement the first trait using Bash? Let's try.

Objects must follow some sort of template. Then, we're going to create an Object function that will represent the object template.

Pretty simple. Now, we have to call this function with some arguments. Suppose we want to create objects using the following syntax:

That would be great, wouldn't it? May we explain the function arguments:

Okay, time to implement the Object function. In bash, there's no "internal state" of functions. Indeed, there's a local scope but it can't be used across different "objects" we may create.

What should we do then? Use global state.

It's weird, I know, but it's the only way to define an object's state in Bash, since it has no lexical scope.

Lexical scope is used to define a reserved area in memory for structures that may be evaluated with arbitrary arguments.

But we can do a trick, by prepending the object's reference at every attribute, for instance:

Yay! We just proved that it's possible to implement the first trait, holding an object's state, in pure Bash script, using global scope and object reference.

Looking at the wikipedia:

Dynamic dispatch is the process of selecting which implementation of a polymorphic operation (method or function) to call at run time. It is commonly employed in, and considered a prime characteristic of, object-oriented programming (OOP) languages and systems.

Can we implement this second trait, important for the object's behaviour, in Bash? Let's try.

As one could guess, we can implement behaviour using functions. Suppose we want to call functions as follows:

In order to allow saving the function name into the object's scope, we'd have to support lexical scope, which opens possibilities for computing techniques and structures such as late bindings and closures.

Unfortunately, Bash has no support for lexical scope due to its simple grammar rules. Remember that it's a script language, after all.

But we can do another trick as well. How about passing the scope (object) as an argument to the function? Something like:

First, we have to define the display function:

Great. Now, time to create the object using the function as an argument:

And, of course, we have to parse the fn argument in the Object function, by just adding the elif clause:

At this time we are all set, as we can already call the function passing the object to it:

We just proved that it's perfectly possible to implement the second trait in Bash too, by using function local scope, object reference and argument passing.

Thus, we can say we can implement OOP in Bash. Okay, very limited, but possible.

Now, we can unlock the power of OOP in Bash by adding more behaviour as much as we want.

Must implement a deposit function? No problem, that should be super easy at this moment:

OMG, what a wonderful day!

Grouping related data and behaviour together

At this moment, we have two functions at the script scope, with no semantic meaning.

We can create another function that would wrap attributes and functions related to "accounts". What about calling such a function, Account?

No way, it looks like a Class we see in many Java/C++/Ruby tutorials!

But it's not a class in Bash. In the end, we're just simulating OOP.

However, since Bash relies in global scope because of its scripting language nature, we can organize our code using OOP, then allowing to interacting with objects like the following:

In this article I wanted to explain 2 important traits in OOP by using Bash script.

This great blogpost inspired me to explore implementing OOP in Bash. I'm not an expert in Bash, but it was very fun and pleasant to play at this matter.

I hope you enjoyed the article, feel free to drop any comments. The code is shared in this gist.